In 2020, the number of accommodation provider businesses in Indonesia was recorded to reach a number of 30,823 businesses with 870,783 available rooms. Of this figure, 3,644 businesses or 11.82% of them are hotels classified as star hotels with a total number of rooms of 352,845 units. According to the Association of Hotels and Restaurants in Indonesia (PHRI), the hotel sector experienced a decline in occupancy rates of up to 25-50% year on year in the first half of 2020 due to the Covid-19 pandemic. However, the booking trend began to increase in the new normal era with the dominance in lodging for the short-medium term with an average stay duration of 1-3 days.

For the food and beverage industry, West Java is recorded as the province with the highest number of restaurants in Indonesia reaching 13,034 units in 2019, followed by Central Java which has 7,458 restaurants and East Java with 7,060 restaurants. Similar to the hotel Industry, the food and beverage industry received negative performance data up to 6.89% during 2020 as a result of the Covid-19 pandemic. Until September 2021, the level of public visits to cafes and restaurants was recorded at the level of 30%-40% compared to normal conditions before the pandemic.

In the second quarter of 2021, the Central Statistics Agency (BPS) released data on Indonesia's economic growth, showing an increase of 7.07% (yoy). Here, the Hotel and Restaurant industry itself showed the highest growth which reached 16.79%, or an increase from the previous quarter which was only 4.15%. Thus, 2022 is then predicted to be a revival year for the Indonesian hospitality industry.

As a busy and growing sector, the Hotel & Restaurant industry has been a major contributor to Indonesia’s plastic waste. According to calculations from Eco-Business, a four-star hotel with 200 rooms can contribute for about 300,000 pieces of single-use plastic in a month, this number includes drinking bottles, plastic amenity, plastic for food and beverage operations, storage bags and latex gloves, also various plastic bags. By that, it is estimated that a total of 352,845 rooms of Indonesia's 3,644 stared hotel businesses could contribute for about 525 million pieces of single-use plastic in a month. Meanwhile for restaurants, it was recorded to contribute at least 93 million plastic straws per year. 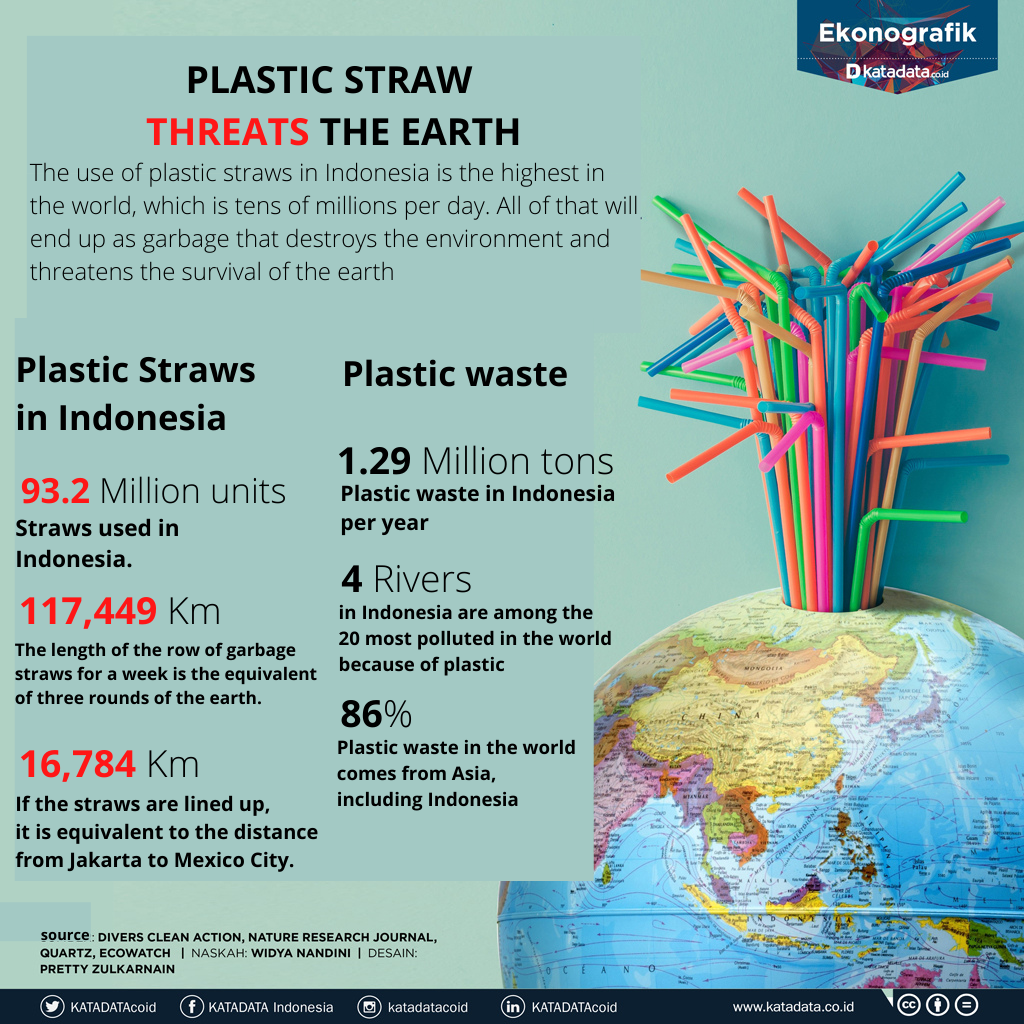 The Indonesian government through Minister of Environment and Forestry Regulation No. 75 of 2019 regulates the Hotel and Restaurant sector as a type of producer that needs to take policies and be responsible for several types of waste they produce, including single-use plastic made from Polystyrene (PS), Polypropylene (PP), and Polyethylene (PE) such as plastic straws, cutlery, drinking bottles, and disposable paper utensils.

With the obligations that have been determined by the government, the hotel and restaurant industry has begun to take action in managing the waste it produces. The latest is an initiative from PT Trinseo Materials Indonesia. On February 3, 2022, PT Trinseo Materials Indonesia brougth its "Yok Yok Ayok Daur Ulang" movement as an educational program on waste management, especially sustainable plastic waste through a webinar of preparations for waste management in the face of the return of tourism in Bali. This program will proceed with an alliance that combines various parties, including hotels, restaurants, producers, consumers, recycling associations, and other stakeholders in waste management and the polystyrene (PS) recycling process. 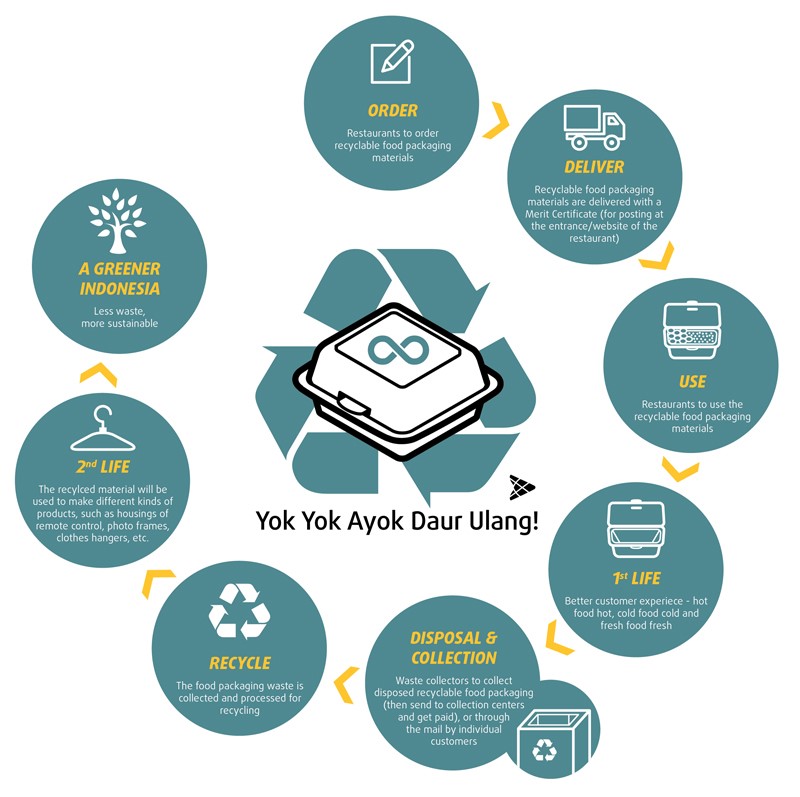 PT Trinseo Materials Indonesia itself as a packaging producer is aware of the company's responsibility for its products for the environment. Therefore, the company makes packaging products that can be recycled and then distributed and organized with its alliances. With the process of sorting, collecting, then proceeding the waste with the recycling process that is applied together, thus the "Yok Yok Ayok Recycle" program is also designed to achieve circular economy status.

On the other hand, reducing plastic waste has also been a program of the Indonesian Hotel and Restaurant Association (PHRI) since 2019. With an appeal from PHRI, various hotels in Indonesia have started running their own plastic and straw reduction programs. For example, the IBIS Manado Hotel has reduced the use of drinking water in plastic bottles by 100% and replaced it with the provision of glass water kettles in each room. The same approach has also been followed by the Aston Jember Hotel that reduced its plastic waste by replacing plastic drink bottles in the room and meeting room with water jugs and glass. There is also the Batiqa Hotels Karawang which minimizes the use of plastic by replacing amenities with ecoplas which is made from cassava flour and thus decomposes faster, and the Borobudur Hotel which uses paper straws and provides dispensers in a number of rooms so employees must bring their own tumblers.

Moreover, in an effort to manage and minimize hotel waste, recycling activities have also been initiated in several hotel programs in Indonesia, such as the Hilton Bandung Hotel that collaborate with PT. Diversey Indonesia in launching the Soap for Hope movement. Soap for Hope itself is a recycling program for used soap by sorting soap that is still fit for use and remade into new forms and packaging.

In addition, there is also the ASTON Priority Simatupang Hotel which collaborates with the Muda Rasa Empati Community in environmental care activities at Tanjung Burung. This program includes various activities such as processing waste into fertilizer and plastic recycling, as well as cleaning up garbage in the Tanjung Burung Island Trash area. As for the hotel itself, the management stated that it had implemented a plastic reduction program in various areas including restaurants, rooms, and meeting rooms.

With these efforts, it is known that the response and awareness of guests and customers are the main thing that needs to be paid attention to. Within this scope, there are still guests who are not aware and do not carry out plastic waste reduction programs. Customers usually bring bottled water for reasons of cleanliness and sterilization considering the vigilance created more specifically in the era of the Covid-19 pandemic. Thus, various programs that have been initiated with good ideas have not been fully realized as they should be.

However, the improvement on the other hand still occurs. According to data by CNN, the no-plastic straw movement has made a significant contribution to reducing plastic waste produced by restaurants. For the Jabodetabek1.

With various programs and initiatives implemented, it is known that the waste management program by producers has basically begun to be implemented in the hotel and restaurant industry sector. However, sustainable management is needed so that the program that has been started can overcome the existing challenges. In the future, the sector can conduct socialization in digital form and directly to guests and customers to support the achievement of waste management programs within the scope of hotels and restaurants.

Introduction Business Sectors Directory Projects and Funding
Your experience on this site will be improved by allowing cookies.